Here is a practice track for working on your E major soloing. It is two chords, a I-IV progression – E and A in the key of E major.

Here is a practice track in a folk rock style, based on the chords to “Knockin’ on Heaven’s Door”, a perennial guitar favorite – mainly because the chords are very easy:

To solo over these chords the best place to start is in the key of G major, as all the chords  contain only notes from that key.  So get the G major scale under your fingers, and make use of the following track to hone your improvising skills!

Here is a practice track for beginning and intermediate guitarists – done in a light rock style. The chords are

Practice soloing over the progression using the G major scale. Some other strategies you might find interesting to play with are

Here is a simple practice track for practicing improvising in a C major scale. The chords are

It is suitable for any player who can play the C major scale! When you are playing, see if you can listen to each note, and pick out notes which go with the chords.

Playing the guitar is about making the most of what skills and techniques you have, being musical with the things that you CAN do. Don’t worry about things you can’t do – just focus on what you can do, and be as musical as you can. The more you play, the range of things you can do increases – especially if you have a good regular practice routine.

As an example, here is a melody part for the same progression played entirely in first position, using only one octave from the G string up to G on the top E string:

So be as musical as you can with the skills and technique you have. It is a good habit that will strengthen your playing as you continue to improve your technique and skill level. And don’t forget to have fun!

This practice track is done in an Indie Rock style. The rhythm section is composed of drums, bass, and rhythm guitar, with a tenor guitar line that is similar to the bass part, but an octave higher, and playing on all the beats.

The progression replaces the diatonic D minor chord which fits with the C major scale, with a dominant seventh chord, the D7. This substitution is a common one in Jazz and swing tunes, and gives the progression a stronger blues flavour than would otherwise be the case. 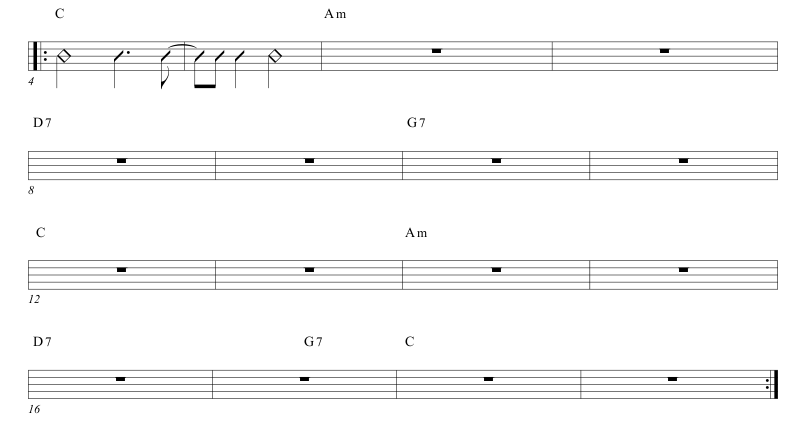 (1) The simplest approach to soloing is to play in C major throughout, being careful to avoid F over the D7, which would clash with its F#.

(2) A more sophisticated approach  is to play in C major, changing to D mixolydian (G major) for the D7 chord. One can then outline the chromatic decent from F# in the D7 chord, to F in the G7 chord, then E in the C major chord, to effectively emphasise the changing harmony.

It turns out that the melody for the children’s nursery rhyme “Have you seen the Muffin Man” can be played over this progression, an example of approach (1). Below are examples of the three approaches outlined above:

Now, try your own:

Practice track with no lead

This practice track is done in a light rock style, and is great for practicing soloing using the F major scale. The chords are

So download the practice track below, and start having some fun!

This is a practice track for beginning and intermediate players to play along with. It is in a basic folk rock style, but can be used by people interested in country or rock as well. You can use the track in several ways.

Firstly, try and strum along to the rhythm guitar, and secondly, practice playing your own solos over the rhythm track. The rhythm guitar is panned a little to the left, with a second guitar strumming a chord every two bars panned just to the right. There are two basic rhythms, with occasional variations. For the first 16 bars, the strum used is predominantly:

The strum then changes to the following for 16 bars:

The two strums then alternate each 16 bars. Note that palm muting is used to stop the strings from ringing out excessively!

The second way you can use this practice track is to practice your soloing. Use the C major scale as your starting point. This will give a basic folk rock sound. Introducing a Bb over the C chord will generate a more bluesy sound (the b7). The blues sound can be further enhanced by introducing an Eb (the b3) which can be bent partly or all the way to an E. You may also like to experiment with the C and G major pentatonic scales, over the C and G chords respectively, which will give a more country sound. Then try the C minor pentatonic scale, which will give a harder rock or blues sound.